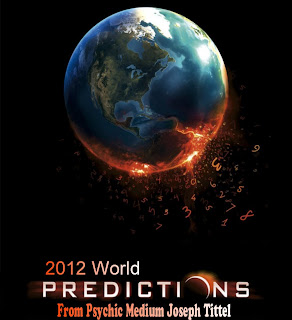 From Joseph's December 2011 Newsletter
Every year, right around this time, Joseph gets ready to prepare his world and celebrity predictions. As many of you know Joseph predicted in 2011, in complete details, everything that happened with the Japan disasters. Joseph was the only psychic in the world to accurately predict Japan's disasters including the issues with the nuclear power plant and toxic waters. This is just one of dozens of predictions Joseph has made over the past few years that have come into light. As those who follow Joseph know, Joseph's predictions are very detailed and have a good track record for coming true.

Joseph will spend hours going through prayer and meditation in order to connect with spirit and hopes to receive information and visions of upcoming world events for the coming year. Joseph will sit with a recording device while in meditation and will receive information from Spirit in many different forms. Joseph receives information from Spirit in the form of flashes of pictures, small video clips, numbers and different symbols that all need to be interpreted. Not only will Joseph see different things he will also get a strong gut feeling by tapping into his intuitive self. Joseph will say everything he sees into his recording device and later will go back, listen to the recording, and transfer everything into writing. Then Joseph will organize the predictions and even while doing this will still often receive more messages from Spirit.

All of this is done and prepared by Joseph usually only one week prior to announcing his predictions on his live New Year's Day radio show. The reason being that in the past Joseph prepared them much earlier and several things came true before he had the opportunity to announce them. This year Joseph may do things a little different then he has in the past with his yearly predictions. You can expect him to post a video or two on his YouTube page right before the new year and on New Year's Day. And as always Joseph will announce his yearly 2012 world and celebrity predictions on live radio New Year's Day Sunday, January 1, 2012 at 1 PM EST. during a special three-hour edition of his weekly radio show Journey Into The Paranormal.

Be sure to mark your calendar and join Joseph New Year's Day for this special live radio event, one of the most listened to radio episodes on the net. You will not want to miss this. Joseph will usually rotate back and forth from his predictions to taking a caller and giving them some 2012 predictions for their personal life. So tune in for your chance to talk to Joseph and tune in to win in Joseph's monthly give-away. You could win a free reading with Joseph just by tuning in live.

Click HERE for the direct link to Joseph's New Years Day Live Radio Show and be sure to bookmark it so you don't miss it. On Tuesday December 20th Joseph will do a special 2011 predictions review show. Listen to the live here.

Hi Joseph, you mentioned possible WW3 in your predictions in 2011, is this something you feel strongly about, and how far reaching will it be? I am based in the UK.