Fund-Raiser Is A Huge Success 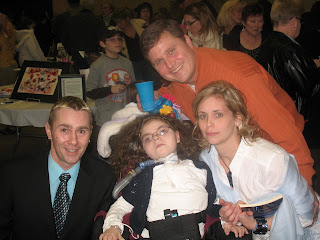 Late last year a client of mine, Joanne, shared the tragic story of eight year old Caroline. Caroline was severely injured in an auto-mobile accident when she was only ten months old. A severe spinal cord injury would leave Caroline confined to a wheel chair unable to care for herself and unable to communicate with her family. Joanne asked if we would be interested in doing a fund-raiser to raise money and help Caroline and her family with expensive medical bills. Without hesitation Bob and I agreed to help out and be a part of the fund-raiser. We began advertising the event on the radio and on my site. The picture to the right is of Caroline, her mother, father and I. 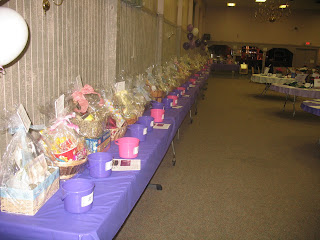 Local businesses and other generous people donated goods to be auctioned off and baskets for a another silent auction. I never seen so many baskets in my life. There was a fifty fifty raffle and even a concession set up to purchase something cold to drink and even a hot dog or pretzel. All to go to the help Caroline. Joanne pretty much put the whole event together. Bob kept track of the donations, which were forwarded to the parents, registration and getting me ready to go. So much went into this event and we are very grateful for every one's participation and donations.
More then 200 hundred people ended up attending the event.

Messages came through very strong. Maybe even a little stronger then usual. This could have been because most of this audience has never seen me before and many were skeptics. Spirit likes to be sure to get the message across making sure that the messages come with strong 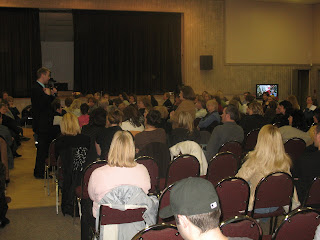 validations. At one point I went to a whole row of women in the back. The connections were strong, but not strong enough for another younger energy to catch my attention. A young man, in spirit, was in the back jumping up and down in his baseball cap trying to get my attention, and he did just that. Another young man came through within the row and pulled me right to his mother. The details of this reading were amazing. The picture to the right was taken during that connection and if you click on the picture to enlarge it you will see an orb right above my head. Another orb appears on the right of the stage and next to the speaker on right side of stage.

If I recall correctly the young man was killed in either a motorcycle or auto-mobile accident. I visually went to the scene of the accident in my head. Therefore I was able to describe accurate details of the accident which were validated by the mother. His connection was so strong that absolutely each detail of each message was validated immediately by his mother. He even wished one of the women in the group a happy 50Th birthday, maybe his mother but don't recall. He even joked with his mother saying he saw her bless herself every time she drove past the cemetery. Also reminder her that it was not important that she stopped in to visit the grave site. I find myself receiving the messages often from the deceased that they rather not have us mourning over their graves. 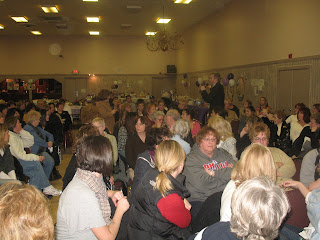 yrd and the song "Free Bird". It just so happened that a quote from the song was on his gravestone. He even gave me his initials, which were A L, then his name. He then validated a visit to his mother in her dreams and wanted to assure her that it was truly him. The young man was not going to leave without bringing some humor to the group. He mentioned that years ago he baked some brownies with some marijuana in them. Then he tricked his mom and a few others to eat them. It was one of those family stories that everyone still laughs about. His mother laughed, said they were very stoned, and confirmed the whole story. Everyone enjoyed that story and the details of this reading were amazing.

No one could have left this event without knowing that they witnessed something truly amazing. So many connections that I could right for hours about the experience. Most importantly this event was successful and according to Caroline's mother, it came in the nick of time. A piece of medical equipment which would help Caroline communicate with her family just became available. The equipment is very expensive totalling more then seven thousand dollars. So a goal was set prior to the event to raise that amount for Caroline's Hope and to purchase this new equipment. To my surprise the event raised more then ten thousand dollars. That is so awesome. Last year Bob and I raised that amount total for several causes such as the one we did for the little girl fighting severe arthritis. This year I set a goal to raise double that amount and make it twenty thousands dollars. This is a great start to reaching my goal. So keep your eyes out for future fund-raisers. A special thanks again to all those who helped out with this event and thank you for taking the time to read my blog and allow me to share my experiences with you.
Blessings
Joseph
Posted by Unknown at 8:19 PM