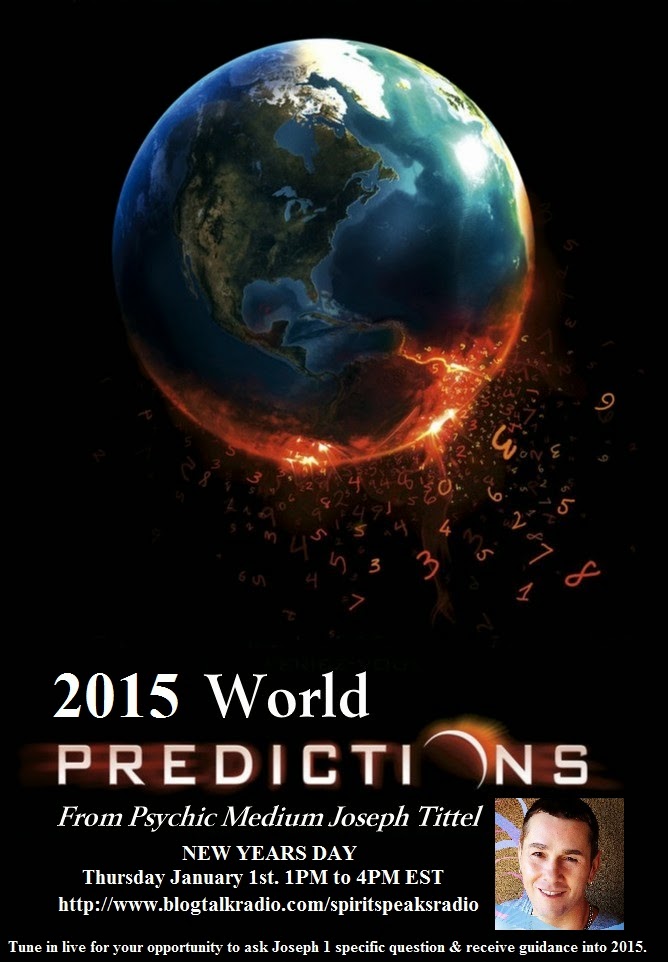 Spiritual Medium Joseph Tittel was the only psychic in the world to predict the 2011 tsunami and earthquake disaster in Japan.This was only one of hundreds of predictions that Joseph has made over the past six years that have come to pass. Joseph predicted the cruise ship disaster that happened in Italy, the outbreak of the swine flu, the Gulf Coast oil disaster and the deaths of Elizabeth Taylor, Dick Clark, Heath Ledger and one of his most famous predictions the death of Michael Jackson. While doing his first radio show in Philadelphia Joseph was asked in the beginning of the baseball season how would the season go for the Philadelphia Phillies. His response was "The Philadelphia Phillies will go all the way to the World Series and win this year!" That was the year that the Phillies won the World Series. Joseph predicted that right at the start of the season.

Joseph's predictions have been featured worldwide and newspapers, such as the New York Post, the Philadelphia Inquirer and Japanese newspapers, along with radio shows and television shows world wide. Each year Joseph presents his predictions for the upcoming year live on New Year's day and shortly after will post those predictions on his blog through his website. The most listened to radio Internet episode on the net New Year's day and the most googled yearly psychic predictions.

Some of Joseph's predictions that have come to pass in 2014 include:

*Record breaking floods. Major issues with water and floods in the Midwest & California

*Record breaking floods in Russia & Europe with more rain falling than ever. This occurred in Europe and Russia when 4 months of rain fell in one day.

*Japan will receive another major earthquake in the next 18 months. They had an 8.9 quake in Northeastern Japan.

*Danger for the royal family and an assignation attempt on the Queen. The uncovering of a plot by British police to assassinate the Queen did happen.

*Major issues breaking out with rodents or rats. This was the first big news story in 2014.

*Thousands of fish washing ashore with horrible stench in a warm hot area.  This occurred in Marina Delray and the stench was horrific.

*Explosion & accidents at a major oil refinery.  An explosion and fire rocked an oil refinery in Whiting.

*Carnival Cruise lines will encounter major issues in 2014. Not a year to take a cruise. This occurred when the Nero virus broke out on a cruise ship.

*Elevator wire snaps causing elevator to crash. This happened in Chili when an elevator crashed.

*Space exploration, looks to me like a something explodes upon entering the sky. This occurred when a spaceship exploded seconds after lift off both in Virginia and the Mojave Desert.

*Dams will be big issues in 2014. This occurred when the Twain Heart Dam began to crack when leaks were discovered. .

*I see Africa having many issues with riots and protests. This did occur when South Africa was seeing more than 5 protests per day.

*Archaeologists finding many new things & bringing light to many things. Major discoveries did occur in 2014 in Greece.
You can access all Joseph's past predictions on his blog and Joseph will give a little bit of an update from his 2014 predictions on his live 2015 New Year's Day show.
Joseph may also be taking listeners calls to give listeners a personal 2015 prediction.
Set your reminders & be sure to tune in live New Years Day at 1PM EST for this special 3 hour edition of Spirit Speaks Radio With Medium Joseph Tittel.

Hearing impaired. Hope you will soon post a written account of your 2015 predictions online soon. Nice that you have a radio show, but would be nicer if you had someone immediately transcribe it and get it in written form online quickly. Thanks. That also allows many to send your predictions out far and wide... to everyone's benefit, including yours. Thanks.