Ever since I was a kid I had a strong pull toward Egypt. Even to 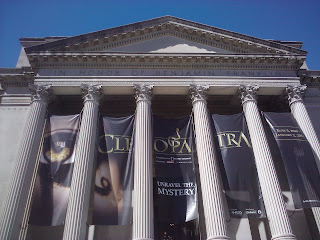 the current day I'm still a bit obsessed with Ancient Egyptian cultures, beliefs, architecture and so on. I'm fortunate enough to actually own a few ancient Egyptian artifacts & continue my search for new ones to add to my collection. After learning hypnosis and having experienced past life regression it has become very clear to me as to why I have this pull to Egypt. I lived there several times in several of my past lives. I was beheaded in one of those lives and a pharaoh in another. I find that any time we are pulled to a specific time era or culture it is most likely because we have lived it all before in a previous life. 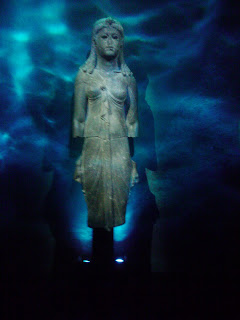 opportunity to see anything from ancient Egypt I jump right on the opportunity. When the King Tut Exhibit was in Philadelphia we were sure to visit. When I heard about the new Cleopatra Exhibit in Philly I knew without a doubt that we would be going soon. Last week Bob gave me a birthday present that included a day at the Franklin Institute and the Cleopatra Exhibit. I was so excited when I found out we were going. Also when I first heard about the exhibit I became excited because I knew exactly what they were going to have on exhibit. I watch every show I can about Egypt and the current exhibitions that are currently going on.


There was one show in particular that really caught my attention. It was all 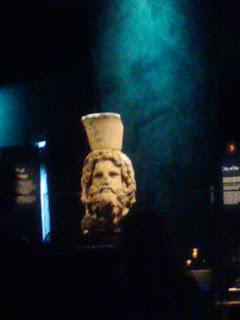 about how an archeologist had found the lost temples of Cleopatra. What made this a bit funny for me is the fact that I have been saying for years that there is so many artifacts and knowledge buried in the waters surrounding Egypt. This is exactly how the archeologist discovered the lost temples of Cleopatra. They show the archeologist making the discovery and pulling some of the artifacts out of the salty waters after thousands of years. No words can explain how amazing these artifacts are and the fact that many have been in the waters for thousands of years and are still in perfect condition. So our day began by crawling out of bed a bit earlier then I prefer on a Monday, one of my days off from work. We headed out to Philadelphiaa and arrived at the fun & exciting Franklin Institute (Shown in the first picture above). I love the Franklin Institute and still can remember our 5th grade trip the the institute when I was in elementary school.

Part of the institute is has been transformed to fit in 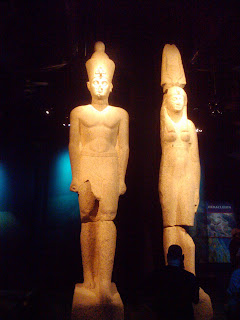 the new Cleopatra Exhibit. The Franklin is fortunate enough to be the first ones to show the Cleopatra Exhibit on her world tour. Beings Bob already purchased our tickets we just had to show them in the front to get into the exhibit. Also, keep in mind if you decide to visit the exhibit you have to pick an exact time slot that you want to enter the exhibit. I believe our time was around 12:20pm. 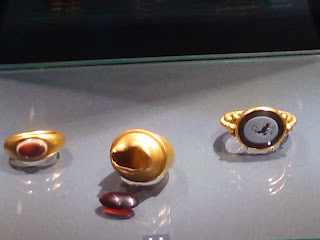 hen you enter the exhibit you are directed to a room in which everyone gathers, sits, and enjoys a short video presentation of the exhibit. Then the doors open and you enter into the exhibit greeted by an amazing statue of Cleopatra (In the second picture above).

Then you walk a pathway with clear glass 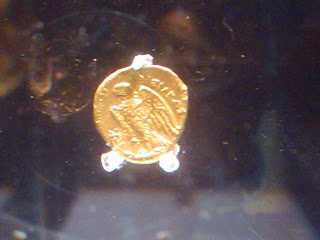 under your feet along with dozens of different sized vessels, jugs and some amazingly in tact pieces of pottery. An amazing site in itself. While walking through you must keep in mind that all these items have been hiding in the dark sea for thousands of years now. So to see these artifacts in such perfect condition some as if they were almost new or freshly made. Then you go from one room to another room each special in it own right. 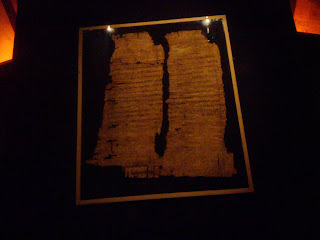 After walking over all the old jugs and vessels you enter a room with some other amazing water vessels and cookware including a solid copper cauldron in perfect condition pictured above in picture 4. One would thing that beings many of these artifacts are made of metals such as copper, bronze, gold & silver that at least the copper would have deteriorated throughout the centuries. 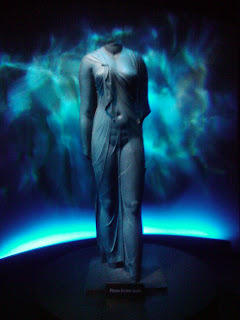 much more then this. Although, I really would like to share some of my favorite pieces from the Expo. One of my favorites are the two very large statues, about 30 feet high, of my two favorite Egyptian Deities, Isis & Osiris, shown in picture five above on the right. Another piece I thought was truly amazing was a set of three rings shown in picture 6. The details of the one ring and the carved out stone looks as if it is brand new. There was gold everywhere throughout the exhibit including a gold coin used as money in ancient Egypt. You can still see the bird carved into the gold in picture 7. There is even a document they found beneath the sea written on papyrus that was said to be signed by Cleopatra herself. This document is in picture 8. Be sure to click on the pictures here in my blog to make them larger so you can see them more in detail. 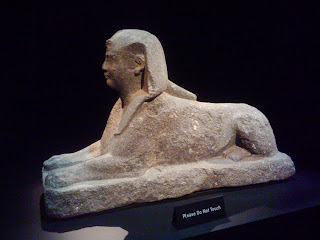 Another favorite piece of mine was the statue you see in the picture on your top right. We could not believe how much precision was in this statue. The details looked as if it was produced by a machine rather then hand carved by a stone carver. There are dozens upon dozens of beautiful pieces throughout the exhibit. I believe at had taken about an hour and a half to walk through.

We also purchased the tickets to see the 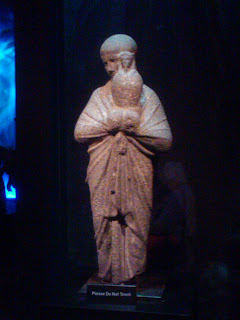 film Mummies going to the exhibit. Mummies runs for in the planetarium. This is what I believe a must see if your maybe an hour or so on a screen that is so big it makes it feel 3D. So if your planning on hitting the exhibit when it comes to your neck of woods go see the documentary Mummies. You can take pictures with your cell phone only. They won't let you use camera's, which make no sense at all. Even still we had taken some great pictures with our phones. Thank you for taking time to read my blog & I hope you enjoyed my journey into the Cleopatra Exhibit. With Love, Light & Desire To Inspire.......Joseph
Posted by Unknown at 7:18 PM

I am glad you enjoyed the exhibit. The pieces were amazing I agree