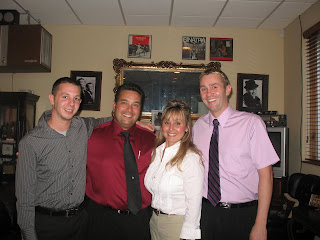 Every other month we hold an open gallery at the Ashes To Ashes Cigar Shop in Bordentown New Jersey. Joe and Stacy Salera own the little shop in the historic town. They are wonderful people and even put snacks out for guests and offer coffee and water. There is no lingering smell of cigars and the shop has a very comfortable setting. These galleries are more intimate with a maximum of 30 guests and everyone gets to ask a question. I love doing events at the shop because I get the opportunity to share more of my experiences in such a nice atmosphere. 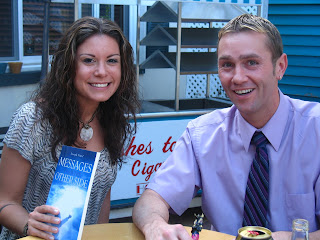 Yesterday's event at Ashes To Ashes Cigar shop went very well as they usually do. The connections that I made with deceased loved ones was extremely strong bringing amazing validations and closure. My first connection with with a young lady's father who had passed. She was not at all expecting her father to come through at all most likely because of some skepticism. She sat with a gentlemen that I found out later was her boyfriend and a New Jersey State Police Officer. He approached me once during the break and again at the end to thank me for bringing the messages to his girlfriend. He also mentioned that he did not at all believe that my work was for real until he experienced for himself.
There were so many connections that I made with
the deceased during this event. 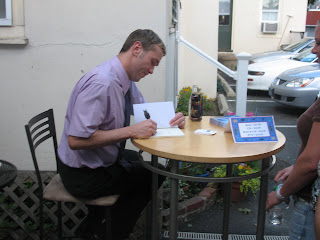 Unfortunately
I never really remember many of the details that I give people. Only things I usually remember are things that blow my mind. Like details of a murder, or when I see the actual accident that a person was killed in. Another person I went to with messages during the event would walk out a complete believer. She told us that she walked in a complete skeptic and non-believer until her grandfather came through. I believe his name may have been Frank and he mentioned breast cancer survivor and the young lady instantly went into tears. He also began showing me that he was shot. He kept saying in the back, near his shoulder and into his lung. The young lady became very emotional and then a few funny things came up from her grandfather to get her to laugh. He also mentioned that he did not see this coming and I felt that he was murdered.

The breast cancer connection was her mother who survived breast cancer just recently. The grandfather coming through in the reading was her mothers father Frank. There were so many other things that came through to bring the young lady validation and closure, I just do not recall the details once again. She told us that her grandfather was shot in the back by her grandmother who is now in jail for murder. She was the most emotional one out of the group, although all of the people I went to with messages showed their emotion. In my position as the medium it is heartwarming when I see my messages bringing emotion to a client. This shows me that my connection was strong and brought well needed healing to my client.
After the break I began to connect with a gentlemen who claimed he was the husband of one of the guests. I was immediately pulled to a woman on my right and received the name Jack. I knew Jack was a gentlemen in the physical world and would be the type of person to let you in front of him in line at the supermarket. Many times I will not connect to the gentlemen type because they end up letting everyone go through ahead of them. Jack wanted to let his wife know he was at peace and happy, but he also wanted to prove how much of a wonderful man he was. Jack was about to bring through both a young man and young lady for the two people sitting next to his wife.

Sometimes when I connect with a stronger energy that is able to bring through messages to me very clearly, they bring messages through for others. Jack felt it was important to bring through these two younger energies for someone he had no connection with. I began getting another name, I think it may have been Michael. Then a young man maybe in his twenties began mentioning a son and a brother. Well his sister and mother were sitting right next to me. That easily explains that he was both a brother and a son. I was feeling that he was killed in an automobile accident. He gave me visions of the accident and insisted that it was an accident and was not at all related to drugs or alcohol.
I had to describe to the mother exactly what had happened to her son in this accident. He said that an animal ran out in front of him but he was not trying to avoid hitting the animal. He insisted that he would just hit the animal and not risk an accident. He was looking down for a second and when he looked up the animal was in front of him. The animal actually scared him and caused him to jerk the wheel and lose control.

Then I began getting a skunk and was thinking that it was maybe a skunk that ran out in front of the vehicle. No. Now I'm getting a sense of humor, this is something funny about a skunk. OK, now I'm back to Jack. He is bringing up the incident with the skunk. His wife hesitated and then I gave her more information. The skunk sprayed one of the pets. She laughed and confirmed the skunk incident.

Jack just wanted to let you know he is still here with us. Then I go back to the young man and he mentions his sister and also a younger female present with him on the other side. His mother and sister that I was giving messages to confirmed that he had a sister that had passed also. Then I began getting pigs, now I feel like I'm at the zoo. LOL. It took a few minutes of me seeing pigs in all forms including stuffed pigs and Miss Piggy for the two to acknowledge the message. "Yes" the young lady responded. "My brothers girlfriend collected pigs." He is also telling me that there was a pig placed in the casket at the funeral. She became overwhelmed with emotion and confirmed that his girlfriend did place a pig in the casket.
Another message I lept seeing during this session had to do with autum leaves. I kept seeing these leaves and had no idea what it had meant and neither of the girls knew. I said that maybe it would be a sign from your brother. Sometimes things are mentioned in a session as what I call a re-validation. This is something that will usually happen or something you will come across within a few days of your session. This is your loved ones way of reminding you about your connection with them and making sure you know it was for real.

Well today I received an email from the young lady. She wanted to thank me for bringing so much healing into her life and to let me know that she figured out why her brother mentioned the leaves. When she went to work this morning and turned on her computer, there were the leaves on the desktop backround of her computer. Her brother certainly got his messages across.

Amazing work.........I cannot imagine being able to do what you do, however I think it is so wonderful that you are able to help people find peace in death!
Gifted.....
Lauren