James Van Praagh is by far one of the top mediums in the world. He is the author of the best selling book "Talking To Heaven" along with several other books and meditation Cd's. James also hosted his own well known show "Beyond With James Van Praagh". James is also one of the producers for one of my favorite television shows "Ghost Whisperer". 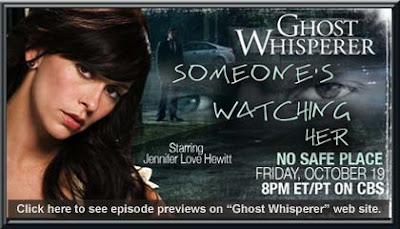 A few weeks ago I mentioned to a few friends that I really wanted to go see James Van Praagh in New York. James will be holding an event at the Omega Institute in upstate New York this coming weekend. I have so many things going on this weekend with the Breast Cancer event and other thing, so there is no way I could go. It was very odd that the very next I received an email message from James. It was not long after that I received a phone call from James.

It was quite an honor to receive a call from James. He complimented my work and also mentioned that I needed to stop smoking. That was actually one of the first things he said to me. So I will certainly focus on quiting sometime soon for sure. I hope to talk to James again in the near future. If your not familiar with James, you should visit his web site. If you are familiar with James, you should still visit his web site. http://www.vanpraagh.com/index.cfm
Posted by Unknown at 9:59 PM