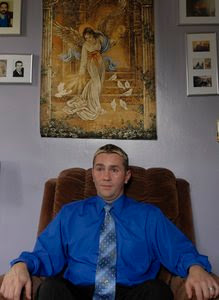 By David Hiltbrand
For the Inquirer

The name of the cigar store in Bordentown, Ashes to Ashes, has never seemed more apropos than on this weekend afternoon.

Joseph Tittel is opening a portal between the living and the dead.

About 30 people have paid Tittel $45 each in the hopes of hearing from their dearly departed.

And Tittel, a rising local medium, self-taught and unpolished, but gaining droves of followers in New Jersey and Pennsylvania, is the pipeline.

"I have a passing with lung cancer . . . I think from the back of the room," intones Tittel, 37, who resembles Ricky Schroder with thicker eyebrows.

He homes in on a trio of sisters sitting together in the last row: "Somebody is pregnant and don't even know they are."

He gestures at one of the women. "You might want to get a test, because if you're not pregnant you will be by the end of the month.

"Who is missing the tip of her finger?" he asks, switching subjects abruptly.

"My great-grandmother was missing the tips of all her fingers," the astonished woman says.

He clutches a purple crystal in one hand and a white one in the other, squeezing them, as he says, to keep himself "grounded."

So it continues throughout the afternoon on Memorial Day weekend as Tittel mixes what sounds a lot like clever guesswork with startling details.

"That lawnmower you're thinking about buying - Dad says, 'Go to Sears,' " Tittel instructs a woman.

"Your brother is driving me nuts," he complains to one elderly man about his departed sibling. "He will not shut up."

When Tittel dry-gulches with one of the crowd, all his suggestions meeting with either denial or bafflement, he blows past it, almost as if annoyed. "Just write it down," he says brusquely. "It'll make sense later."

At the end, half the room leaves without having had the opportunity to make a connection. Tittel had warned the crowd beforehand that he cannot control what comes through. But those who do get a reading seem impressed.

"Stunningly accurate," says Lori Juillerat of Lambertville. "The only thing he said that I couldn't figure out was who Buddy the dog was. Everything else, he hit the nail on the head. He got the names of all my relatives, my father's name, and how he died.

"I've had a light that dims and brightens," she continues. "I've been blaming it on an old house. But Joseph brought it up and said my father's been doing that constantly."

It's difficult for Tittel to explain exactly how information from th 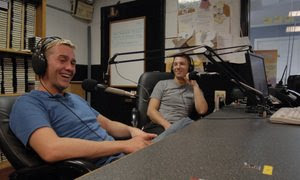 e other side gets transmitted.

"Mostly when I see things, it's with the mind's eye," he says. "I see it but not like I see you. I get a lot of pictures. The spirits have installed a whole dictionary in my head. Certain things they show me mean certain things. My favorite is [a can of] Maxwell House coffee which has nothing to do with coffee. It's the name Max, but that's what they have me trained on."

Similarly, a vision of a cuckoo clock would suggest to Tittel a link to Germany.

Yet out of these scattered symbols, he says he is able to construct remarkably specific messages. It is this ability that motivated celebrity psychic James Van Praagh to list Tittel on his Web site among the 20 mediums worldwide that he vouches for.

That quality is hard to come by, according to Van Praagh, because communication with the other side is tenuous. "It's like a car going by at 60 miles per hour," he says, "and someone is sitting on the side of the road trying to yell something to the driver. It's such a fast vibration."

Speaking of cars, Tittel maintains he also sees the physical manifestation of spirits - and they're often out joyriding, right there with us.

"For some reason they like to ride in our cars with us," he says, laughing.

There are those who believe that what Tittel, Van Praagh and other mediums do is a shameless parlor trick, a confidence game known as the cold read. The practitioner creates an illusion of prescience by combining a close reading of his subjects' appearance and their answers to vague questions.

"There is a simple, rational explanation for how these people operate," says Eric Krieg, an electrical engineer who heads the Philadelphia Association for Critical Thinking, a group that disputes paranormal claims. "If you've lost someone, your memories are precious. It's low to mess around with that."

But those who have seen Tittel work are convinced his gift goes beyond trickery.

"One patient came to me straight from a reading with him," says DuPree. "He said, 'You need to check out your right breast' and indeed she had breast cancer. In the readings he has done, he's told lots of people to go check out different parts of their bodies. I don't know how he does that. If I did, I could save a lot of money on CAT scans."

"What people don't understand is that a medium is already a psychic, but a psychic is not necessarily a medium," says Tittel, who's in the living room of his Bucks County home, the same stucco-and-shingle house he was born in. He lives there with his manager, Robert Breining.

"The difference is a medium can communicate with the deceased."

It's a few days after the Bordentown event, and Tittel is preparing for his weekly radio show, Messages From the Other Side, on WBCB in Levittown.

A gaggle of garden gnomes populates the front yard. The kitchen is a shrine to Elvis. And then there's the inner sanctum, a room with only one window, where Tittel gears himself up to speak with the dead.

"I pray and I meditate before I do my work," he says. "It helps get me to the level where I can tune in to them."

The messages Tittel brings from the spirit world are warm and supportive. "It's all love, positive energy, peace and happiness on the other side," he says. "There is no negativity over there."

In his experience, the departed are like Hallmark-card junkies. "When we're going through hard times, they're with us. And every holiday, special occasion, they're always there. They wouldn't miss anything - the birth of a baby, a wedding - they attend all them events."

Tittel believes he inherited his gift from both sides of his family, a blend of Hungarian, German and Welsh. Family legend has it that his paternal grandmother had an aunt born with a veil, an extraneous flap of skin, hanging over her face, traditionally a portent of extraordinary psychic abilities.

He says that at the age of 4, he began seeing visions of a shining lady at the foot of his bed. Through photographs, he would later identify her as his maternal grandmother, who had passed away before he was born.

He tended to discount most of his paranormal experiences, including, he says, premonitions. "When nobody seems to care about it, you learn not to care about it yourself," he says.

At 19, after graduating from Harry S. Truman High School in Levittown, he began reading tarot cards professionally, but it wasn't until he was 26, shortly after his mother died unexpectedly, that he claims to have received his first direct message from the other side.

Tittel had purchased tickets for an appearance by medium John Edward at a hotel in Philadelphia, convinced that his mother would use the opportunity to send him a message through Edward.

"I heard my name being called, 'Joey,' " Tittel recalls. "Where'd that come from? And then I heard, 'Sit down, shut up and listen. There's people here who need this more than you do. You should know that I'm here more than anyone else.' I just knew it was my mom.

"John Edwards was up there talking about seeing things as a child and I thought, 'That's my story.' By the time I left, I realized, 'I think I'm supposed to be doing what he's doing. I don't know why. I don't know how. But I am.' "

Relying on word of mouth, Tittel began to scratch out a living as a medium. It wasn't until 2007, after a startling performance on the Lifetime series America's Psychic Challenge, that his reputation began to flourish.

You can see footage of Tittel on that show, visiting a crime scene and describing with uncanny accuracy what transpired, at his Web site, www.spiritmanjoseph.com.

Since then, his fees have gone up along with his credibility, but even at his new rates (from a 30-minute individual connection for $150 to a two-hour home gallery for $800), he's booked months in advance.

The higher fees tend to weed out the naysayers. "I dealt with a lot of people that were not very nice about what I do," he says. "They would come and sit in front of me and I would say, 'Why are you even here? Why come just to test me?'

"The change in prices keeps out the cynical people but not the skeptical people, and there's a big difference," Tittel says. "With the cynics, I could tell them what they had for breakfast, lunch and dinner and they'd still tell me I'm a liar. Skeptical people have an open mind.

"And they always get the best readings. It drives me nuts. Here's a woman who is so receptive and eager and so wants to hear the messages. And there's Mr. Skeptic over there and he's getting the best details. That's the spirits. They want to make sure that he leaves knowing he made a connection."

YAY Joseph!
You are SO deserving of this great article and publicity! You are a fabulous medium--one of the best I have ever met! I can't wait for you to have your own TV show someday! Many blessings for your good work and for the comfort you bring to so many people!
Love and hugs,
Susan Duval
www.SusanDuvalSeminars.com