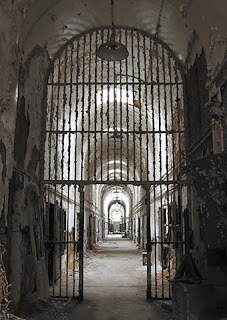 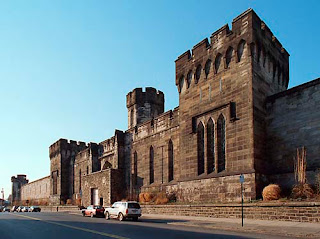 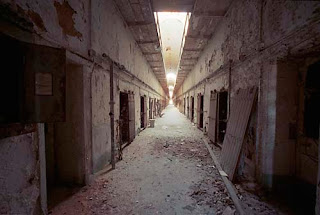 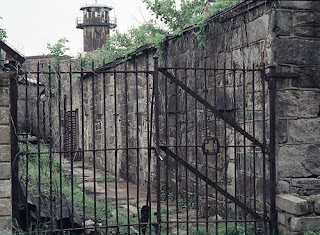 Today is the first day of my blogging experience. The entire blog idea came from Bob. He thought it would be a cool idea, especially because of what is coming up for us over the next few days. Tomorrow evening we will spend the first evening in the Eastern State Pen. As some of you know, this will be filmed for a new TV show called "Mysterious Journey's which will air on the Travel channel. Basically we are going ghost hunting.
Today I spoke to Robert from the Garden State Ghost Hunters Society. We discussed the basics for tomorrow evenings experience at the State Pen. I have never worked with a Parapsychology team before. They will be equipped with night vision camera's and ghost catcher gadgets. They will also have remote camera's set up in several rooms. I recommended tennis balls with the numbers one through three. I want to throw them out and see if they(any spirits) throw them back. It should prove to be an exciting experience.
There is some reasonable fear in enter such a place. Remember, this is an abandoned prison that once held murderers and horrible people. There will be need for prayer and protection when entering such a place. These are not the type of energies that I'm use to dealing with. They will be a little or maybe even extremely hostile and will not want us there. As far as I know at this point I'm going in to communicate with these energies and to try and get a response, maybe a physical response. We will be there filming from 5PM until at least 1 AM. Wish me luck! A few prayers would help too.
Other then that, I had another interesting experience today. I had a few clients this afternoon, but one stuck in my mind. The young man (guessing around 35-40) had come with an open mind. Quickly his father made a connection and I said to him "your father is here,(he smiled) and he has a young lady with him. She is telling me she passed of cancer, breast cancer. I went on with the reading and it happened to be his wife who passed from the terrible disease. I could see the pain in his eyes and felt the strong connection the two have had. She mentioned two boys and how well he is doing with them. I could feel the sigh of relief from him when I mentioned that. All of this had made me understand one thing that I knew, but we all need a reminder once in a while.
Sometimes you don't realize what you really have until it is gone!
Cherish your loved ones and every moment with them. The little things they do, try not to miss. For when they are no longer with us, these are the things we will miss the most.

What a wonderful statement for the day, cherish your loved ones.

How exciting for you, I can't wait to see the program on the Travel Channel when it airs

Joseph, Have you any idea when the programme will be aired?

Good luck and God Bless...I am sure you will be fine, but I believe it will be tense to say the least.

Thank you for sharing your gift, it is truly special!

Wow! Way to go! I have just recently found out about you and...I'm really glad you exist...and that you do what you do...! Thanks!

Because you so clearly walk within the light,I am sure that you will be fine and that you are very protected...

I just feel like I need to say that there are probably a lot of folks who spent a lot of their physical time there that were in fact...not even guilty...and I am praying that when you come around that they will just be able to find their way home...

Anyway, lots of love and light and laughter to all of you who read this!

You are truly an amazing person with a special gift from God. I wish you peace and safety in your adventure at Eastern State Pen. I will keep you and Bob in my prayers.

Thank you so much for sharing this. I am very interested. Did they give you another guardian cause they feel you need it? Scary.. I will keep you and Bob in myprays have fun and be careful!!!!!!!!

Met you for the first time tonight at the Double Tree after prompting from a friend. You were right-on with the info you relayed to me from loved ones, but what made the night over the top was listening to you connect with the other people in the room and their loved ones. AWESOME! As you know, you are blessed with such a special gift; being able to ease so many people who are tormented or just curious about where and how their loved ones are.
We are lucky to have you here with us. Best of luck to you in your journey with the souls. May you always walk in peace.

Bob, Love your sense of humor, you made the night extra fun!