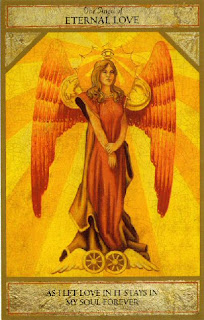 The filming of "Mysterious Journey's" along with Friday's show and a booked weekend left me pretty much wiped out by today. Saturday proved to be an excellent day for messages that came through for my clients. A group of three women come together for separate readings. I immediately picked up the connection and the fact that the three were related. Normally I suggest that if you are related you should do this as a group. They insisted they all wanted to go separately even though they were related.
The reason I would suggest that relatives get their reading done as a group is quite simple. From my experience most of the time spirits only come through once within that day. For example. Three sisters come to me in hopes to connect with their father. They insist on going separately so I agree. The first sister gets a great connection from dad and leaves feeling fulfilled. The next sister get a connection from grand mom and nothing from dad. She leaves feeling as if dad is upset with her in some way.
So before taking the first woman into the room for her reading I asked how they had heard about me. One of the girls responded that she heard from a friend of hers "Virginia". Well that's not a common name, I think I knew exactly who she was referring too. Virginia came for a reading a few weeks ago and we came to discover that her and my mother were good friends. I remember telling her about a gentlemen coming through in her reading by the name of John. I remember John because he had only one arm. At the time she had no idea what I was talking about and could not relate the message. Well today the woman told me Virginia remembered after she left who John was and validated much more information after her session.
After realizing that she was friends with Virginia I mentioned my mother to her, thinking she had to know her also. She actually knew my mother years ago also. So we went on with the three separate readings. I was amazed that each one of the women had three separate connections. Their relation was grandmother, her daughter and granddaughter. Indeed you would think they all would want to connect with the same person.
The grandmother had a strong connection from her husband and her mother. Her daughter connected with her own daughter who had tragically taken her own life. The final reading with the granddaughter was a connection with her father and a friend who passed tragically. It was fascinating to me to see all three get such strong connections from three separate energies. Each spirit I connected with was the one they wanted to hear from. Another thing that does not happen often.
Sunday I conducted a private gallery which went very well also. I actually do not remember much of what came through during this gallery. The only thing I remember is hitting a wall a few times with one person in the group. Hitting a wall happens sometimes when a person does not want to accept the messages for whatever reason. Sometime this is because of skepticism or the desire to only hear from who they want to hear from. The messages come through and I get a constant no response. I'm strongly pulled to the person and they still insist that I'm wrong.
This can become very frustrating, especially in a group gallery setting. Spirit will keep repeating the message until the person accepts it. If they don't then it is like hitting a brick wall for me. My work is very special to me and when I hit a wall I feel as if I'm not getting the job done. These are messages of hope and validation that your loved ones can communicate with us. It is very important to me that the message get through. When a person get emotional during their session, and most do, it gives me a feeling of fulfillment. It tells me that they received the messages and my job is complete. 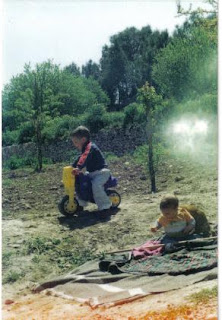 I hit a brick wall with a client today also. She even admitted that the person coming through was not the person she wanted to connect with. So you can imagine that I got a lot of No's from her during the session. Later the information will hit her and she will be able to validate more of the messages. This happens often when a client sets a focus on who they want to hear from and what they want them to say. Unfortunately I have no control over who comes through and what messages they will bring.

I found this interesting web site today with pictures of spirits of angels. The web site is http://www.angelsghosts.com/angel_pictures_october_2006.html
Here is a picture of a spirit around the children. If you have any pictures of spirits send them and I will post them here. I will also be blogging about some other haunted places I have visited in the past.

Remember, There Is An Angel Watching Over Us All!
Posted by Unknown at 8:18 PM